This is more or less my thoughts about how to structure a bulk loader for chado. Majority of the ideas come from writing obo2chado loader. obo2chado still lack the design that i am aiming now, but most of the upcoming one will follow that. And the future idea is to refactor the obo loader to that mold.

There should be an object oriented interface for reading data from flat files. That object is expected to be passed along to other classes. For example, for obo2chado loader i have used the ONTO-Perl module.

Probably one of the import one. It’s better to have an ORM that supports mutiple backends and bulk loading support. For Perl code, i have used BCS a DBIx::Class class layer for chado database.

This part is supposed to get data from flat file to temp tables of RDBMS. To start with, lets assign a class which will manage everything related to this task. First lets figure out what kind of information the class needs in order to perform those tasks. For the sake of understaing we name it as StagingManager ….

Remember, there will be a separate manager class for each backend. However, they should share a identical interface.

And then the common attributes and methods are then put into an interface role which any staging loader have to consume and implement.

In addition, we also need some helper classes that could have the following responsibilities:

The above will import four methods/element making a total of 8 methods in the class. For term it will import …

The use will be very simple…

Quite obviously, the responsible entity(or class) will transfer the data to the actual tables in chado database. Lets get down to the interface ….

The methods should run in the following order …

This loading phase should run after the staging as it needs data from staging tables. As usual, the methods and attributes should be wrapped around a generic interface role.

The loader would be provide a command line/webapp interface that basically coordinate these managers(both staging and chado) to load it. The loader frontend also ensures that all the steps are executed in order. Here’s how the software stack interacts with each other. 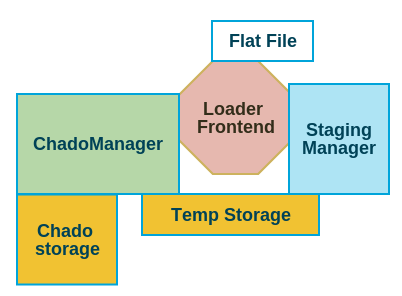 The diagram below shows data flow where it goes from the flat file to the chado database. 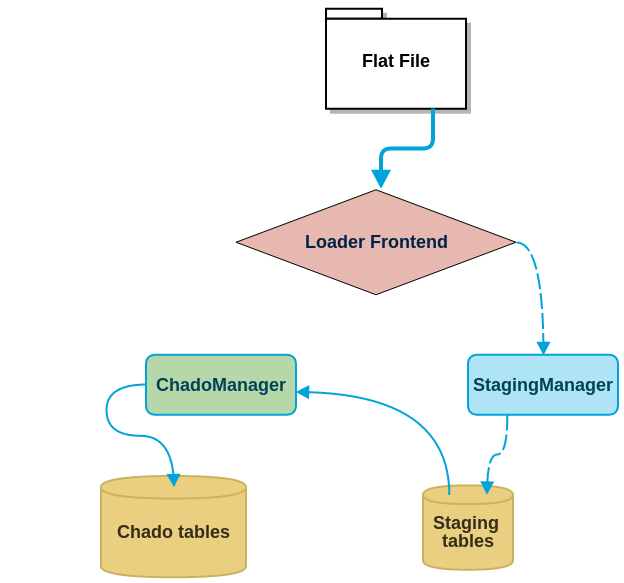 For an implementation of this pattern look at perl based oboclosoure2chado command.